From 6:30 to 8:30 p.m. Monday, August 6, on the Arts Quad, art students will welcome Chautauquans into their work spaces for Visual Arts at Chautauqua Institution’s annual Open Studio Night.

All the art students will participate, and Lois Jubeck, VACI’s managing director, said that the artists are always happy to discuss their work with community members.

“It gives the community an opportunity to see the work that the students have done over the course of the summer,” Jubeck said.

Art students will showcase their drawings, paintings, sculptures, prints, ceramics and digital media, and Chautauquans will be able to purchase some of their work.

Over the last six weeks, students have been working on everything from ceramic martini glasses to nighttime landscapes of Chautauqua, to sculptures based on the ancient Greek myth of Orpheus. Their work has also been on display in Fowler-Kellogg Art Center, as part of the annual Student Art Exhibition, since July 22.

According to Linda Kardos, who serves on VACI Partners’ hospitality committee, baked goods brought by all members will be served at the event, along with trail mix, pretzels and other snacks.

“It’s mostly for the (students), but it’s open to the public,” said Kathy Menz, member of the Partners.

The Partners will set up a table at the event for anyone who would like to join as a member or contribute to the organization that raises money for VACI and art students, specifically. As Jubeck put it, the group is “instrumental” in operating VACI.

The Partners hosts several events throughout the summer to raise money for Chautauqua’s visual arts program and art students in particular. The group recently hosted its annual Stroll Through the Arts Gala on July 28, which typically garners $30,000 to $40,000 to go toward student scholarships.

The 38 students at the School of Art now have six weeks’ worth of work to showcase for curious Chautauquans who are either interested in observing or purchasing their pieces. Open Studio Night comes right before the students’ final critiques, which are run by Don Kimes, VACI artistic director.

Last year, Kimes told the Daily that while the idea of people wandering through their studios sometimes “creeps students out” if it’s unscheduled, they set those reservations aside on Open Studio Night.

“It’s a really nice way to come up, and see what we’ve been doing all summer,” Jubeck said. 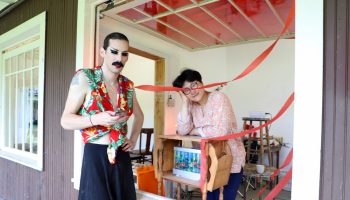