Last Thursday, a volunteer at Smith Memorial Library was caught lying down on the job. And sitting. And staying.

In between bookshelves in the children’s section, Lola the Library Dog flopped on her back, fluffy tan stomach on display.

Helena and her mother Lilian Kretc selected the children’s book, Chicks Run Wild, and settled in next to Lola’s mat on the floor. Helena leaned in close to the dog’s reddish brown head and received a sloppy kiss on the face.

From 4 to 5 p.m. Thursday, July 18 and every Thursday through Week Eight at the Smith, children ages 5 and up are invited to read to Lola, a certified therapy dog. This is Lola and Noller’s third year volunteering at Chautauqua.

“I think Lola is our first dog here at the Smith,” said library director Scott Ekstrom. “We have been happy to have her.”

Noller adopted Lola at 11 months old from her local SPCA shelter. The retriever-shar-pei mix was rescued along with eight brothers and sisters after being born under a shed in the middle of winter. Because of a potentially deadly heart defect, Lola was the last of her litter to be adopted.

“I took her home, and my vet said, ‘Just give her care and she’ll probably grow out of it,’ ” Noller said. “And she did, but it was a hard choice. And I was rewarded with the world’s best dog.”

Noller enrolled Lola in obedience school when she started pulling on her leash and acting obstinately around the house.

She received her therapy dog certification at 1 year old.

Lola’s aptitude for obedience training and love of kids inspired Noller, a certified literary tutor, to bring her to the Kingston Library in Kingston, New York. Now 7 years old, Lola is a staple at that library during the Institution’s off-season.

“The library throws her a birthday party every year,” Noller said.

Because SPCA volunteers were responsible for rescuing and raising her, Noller believes volunteering at libraries is a way to pay things forward.

“I thought, ‘You should be a therapy dog, because you were brought up by volunteers …  you’ll give back and be a volunteer yourself,’ ” Noller said.

Noller said that sometimes reading to Lola is the first time parents hear their children read out loud, something that can be extremely helpful in understanding their literacy progress.

“The parents can hear where their child’s at,” she said. “A couple years ago I noticed a young girl was dyslexic, and the school wasn’t going to test her for another year. … Why should she languish for a year?”

When she’s off the clock, Lola enjoys trying (unsuccessfully) to meet squirrels and exploring the woods around her home. Her favorite book is Noller’s cookbook, Cooking for Dogs.

When asked if she was in fact a “good girl,” Lola declined to comment. 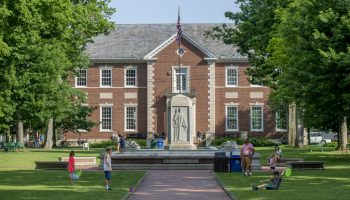