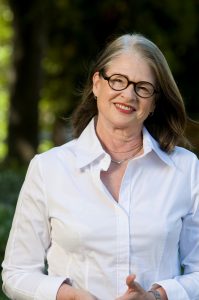 Life expectancy has met an all-time high — but how can culture accommodate it? Laura Carstensen has some ideas.

Carstensen, Stanford University professor and founding director of the Stanford Center on Longevity, leads the “New Map of Life” project, a study of the new directions people can take as they age. She will open Week Four with a lecture at 10:45 a.m. Monday, July 15 in the Amphitheater.

“What most excited us about the collaboration is Stanford Center on Longevity’s comprehensive approach to longevity, with a ‘New Map of Life’ project that challenges our assumptions and identifies interdisciplinary collaboration and public engagement as key to having the greatest impact and finding solutions to the problems — and opportunities — that longer lives present us with,” said Matt Ewalt, vice president and Emily and Richard Smucker Chair for Education. “In other words, the work of the Chautauqua community this week, and beyond, will inform and provide some direction for the ‘New Map of Life’ project.”

The National Institute on Aging has supported Carstensen’s work for over 25 years. She has received prestigious awards for her work and has published several academic articles.

In a Chicago Ideas Week talk, Carstensen said the new landscape of aging has received lots of attention.

“People are living longer, and societies are getting greyer. … You read about it in newspapers, we see it on television,” Carstensen said in her Ideas Week talk. “Sometimes I worry that we hear about aging so much, so often, that we’ve come to accept it with a kind of complacency.”

“In historical terms, in a blink of an eye, we nearly doubled the length of the lives that we’re living,” Carstensen said in her talk.

In the early days of humanity, Carstensen said, life expectancy was estimated at 18 to 20 years. That grew to about 35 in the mid-19th century in the United States, to 79 years in the present day. And it is still growing.

“So we have people growing older, and fewer children being born,” Carstensen said in her talk. “Those two phenomena together lead to an aging society.”

Carstensen said these new demographics mean a new society — one where multiple generations can live together.

“We are at a point in human history where four, five, and conceivably six generations will be alive at the same time,” Carstensen said in her talk. “(This is) a stunning accomplishment of culture.”

But not everyone is celebrating this new era.

“We’ve got more time to spend with the people we love and to realize our goals and to pursue our dreams,” Carstensen said in her talk. “But that’s not the response that we’re hearing today. Instead, individuals are worried. They’re worried about their own aging, their own futures, their bodies, their minds, their financial security. Policymakers are worried about the sustainability of social programs.”

Carstensen attributed these anxieties to humans’ reliance on cultural norms — many of which are changing in the new demographics.

“We look to culture to tell us when to get an education, when to marry, when to start families, when to work, and when to retire,” Carstensen said in her talk. “And life expectancy increased so fast that culture hasn’t caught up.”

This culture, Carstensen said, is designed by and for young people: flights of stairs, miles-wide airports, medical research that focuses on acute diseases and injuries rather than the chronic ones associated with age.

“We need to do this because, if we build a culture that supports long life, top-heavy with experienced older citizens, we will have a resource never before available in human history,” she said in her talk. “We will have millions of older citizens with deep knowledge about practical matters of life, interested in younger generations and motivated to make a difference.”

CHQ Olympics Brings Out the Best in Everyone (Photo Gallery)