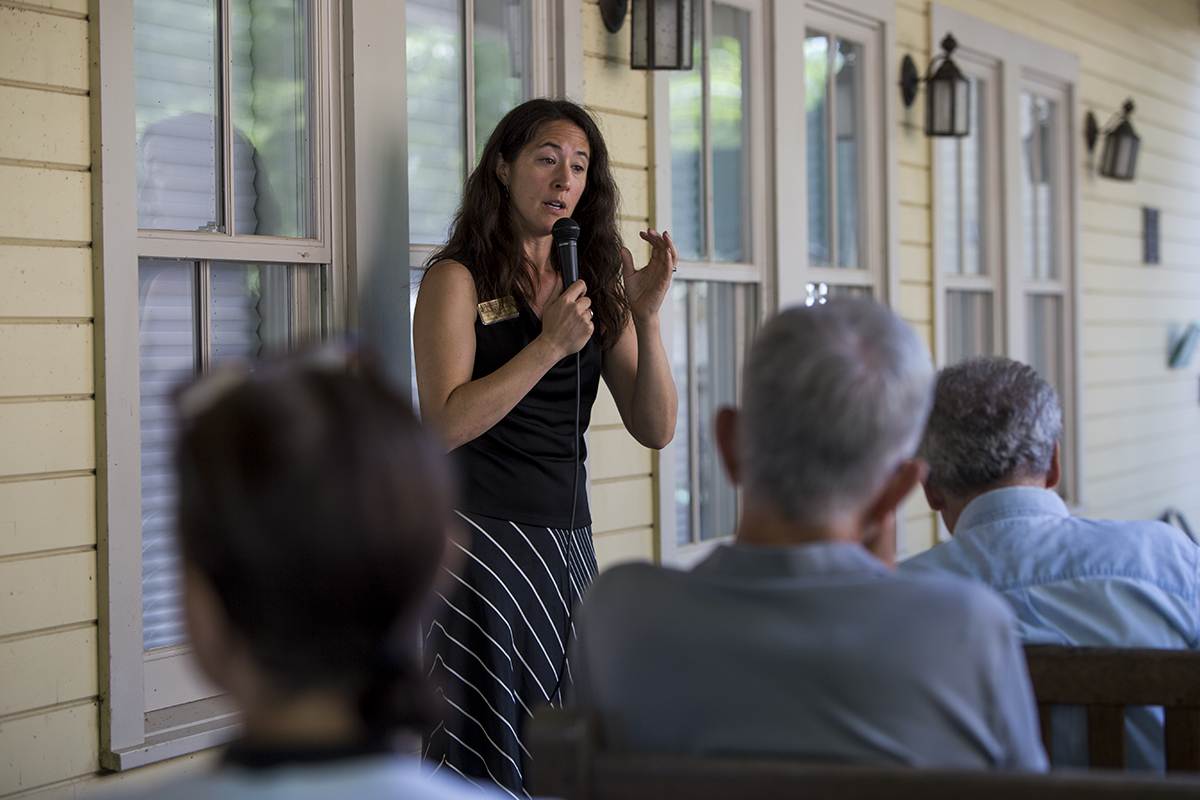 Deborah Sunya Moore has a lot on her palette these days.

As vice president and director of programming at Chautauqua Institution, Moore gave attendees at Wednesday’s Trustee Porch Discussion a look into her work with the various branches of the arts. Her discussion was titled “Fine & Performing Arts & Inter-arts Collaboration” and was held at the Hultquist Center.

When it came to successes she’s seen in her work, Moore focused on collaboration and experiencing art outside of traditional settings. Such experiences included the inter-arts collaboration programs as well as Opera Invasions led by Chautauqua Opera Company’s new artistic and general director, Steven Osgood, some of which occur before Friday concerts.

“Our hope is that when people come from off the grounds for that single Huey Lewis or Avett Brothers [concert], that we can show them something of what else Chautauqua is,” Moore said.

In the past, there have been a few larger collaborations, but Moore said with the amount of time put into those, on top of the workload that directors and departments are facing (12-18 hour days), it can be “pretty exhausting.”

“One of the things that we were looking at to do this year was to do inter-arts in a way that really focused on collaborative community. We feel that one of the most valuable things those grand scale inter-arts projects have brought is greater interaction between all of our departments,” Moore said. “So we said this year, instead of one huge grand-scale, let’s look at the arts what we feel is an inter-arts week.”

Moore said there has been a lot of change and reflection happening with hiring new directors and experimenting with new opportunities.

Jean-Pierre Bonnefoux is stepping down as artistic director of the Charlotte Ballet in Residence. It is not under the purview of the Institution to rehire that position, Moore said. They are instead looking to make Bonnefoux and Patricia McBride, master teacher and repetiteur, directors of the School of Dance and to explore other opportunities that might be outside of Charlotte Ballet for the professional work, Moore said.

“I feel that part of my job as caretaker to the arts is asking some of those hard questions,” Moore said. “Some of those hard questions would be, ‘Should Chautauqua, for the next five to 10 years, have a ballet company in residence for eight out of the nine weeks? Should we look at diversifying or broadening what dance at Chautauqua is for all of us here at Chautauqua?’ These are hard questions because intertwined with all of these questions are long-term relationships. It’s time-intensive. It’s full of emotion and it’s also really exciting because it gets us all thinking about what Chautauqua could be without assuming we should be what we’ve always been in a certain area.”

As the Piano Program searches for a director, a committee is also entertaining different possibilities outside of a single chair. Moore said she hopes to see a decision made this year. CTC will also have Andrew Borba as its new artistic director.

Chautauquan Dennis Wilder asked how younger people are being targeted through programming, adding that he didn’t think 20- and 30-year-olds felt welcome at the Institution.

Moore said they’re working on the problem with a focus group made up of young adults, as well as through interdepartmental meetings. She said opportunities such as the Avett Brothers concert along with experimenting with beer and food preceding concerts at the Athenaeum Hotel are all ways to hopefully welcome that demographic.

“The reality is that my kids came all the way through,” said trustee John Milos. “They wouldn’t miss it for the world. They brag about how many continuous summers they came. Well, they’re now young adults. They’re trying to get careers going, traveling all over the world, all of these things that 20-somethings or 30-somethings do that make it difficult to carve out a weekend to come here.”

Amid the current and future shifts facing arts programs, Moore said one of her goals is to also reach out to the local community in and out of season.

Moore said with the help of actors in the Florida Studio Theatre, the Institution has gone to several local elementary schools through its Young Playwrights Project. That program has taught the skill of playwriting, letting students see their work read and possibly performed by the visiting artists.

Another outreach project includes opening Fowler-Kellogg and Strohl art centers in the pre-season and busing in students from the area to experience an opportunity that many hadn’t before.

Moore said two years ago she saw one student who was enthralled by the artwork she saw.

“We followed her around and she spoke so eloquently about every piece of art and then I look at her teacher and her teacher is crying,” Moore said. “Her teacher says, ‘She’s one of my worst students. She can’t write. She has no grammar. She’s failing some of her subjects. … I had no idea this child was brilliant.’ And she was brilliant. She wasn’t brilliant in the way that we benchmark children. … For me that really represents [that a] Chautauquan can have some pride about what we do.”