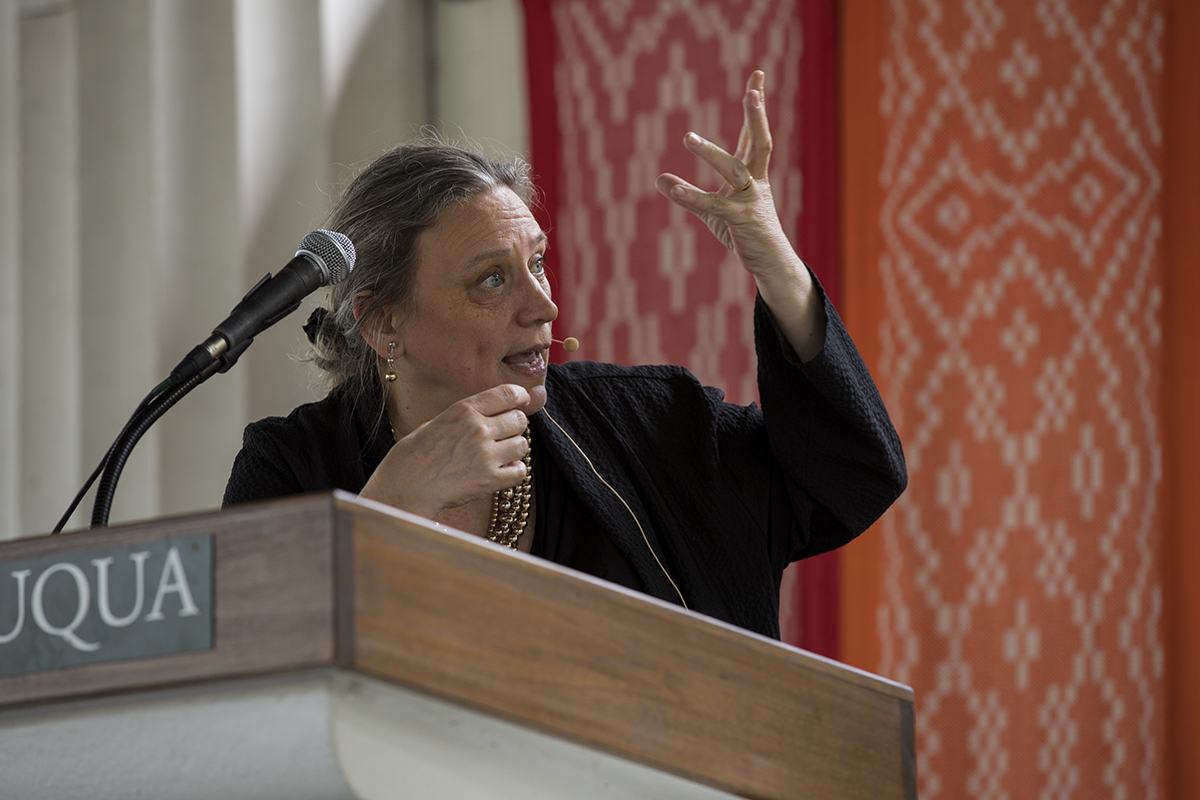 Make sure not to cling to anything or anyone too tightly.

Laurie Patton, president of Middlebury College, discussed releasing the stronghold on life in her talk “Your Face Glows like a Person who knows Brahman: Hinduism as Dialogue of the Numinous,” Wednesday in the Hall of Philosophy. Her lecture was part of Week One’s Interfaith Lecture Series “Inventing God? A Brief History of Religions.”

Her talk began with a description of “the numinous,” which acts as classifying the sacred — but “not just any old sacred.” Coined in the early 20th century, the word has personal implications for Patton, and she hoped audience members could one day connect with it, too.

“Numinous is that sacred experience which causes us to be in awe, to tremble, and the title of this lecture suggests, the numinous causes our faces to glow,” she said.

In Hinduism, there are many instances of “numinous” to be found, including through the natural elements. This idea, Patton said, has similarities to Zoroastrian beliefs, discussed in Tuesday’s Interfaith Lecture by Rohinton Rivetna. Fire, for example, is looked at as “holy and cleansing agent” for people of the Hindu faith.

“The sun was believed to drive a chariot across the sky,” Patton said. “Water was honored as that which contained light, and that which displayed our thirst. The wind god swept across and traded messages with the goddess of night. Fire was at the center of it all.”

Patton discussed the idea of material sacrifice in Indian culture, too. The driving force behind the practice was the belief that it kept the world spinning. From approximately 1500 B.C. to 800 B.C., it supposedly made the seasons turn, and without it, nothing would flourish.

“What was their motivation to build altars, to build a hearth to set a cosmic table and to pour butter into the flames and hold wheat and grass and rice up to the sky in honor of the gods?” Patton asked. “It was what allowed the powers to abide, the crops to grow and the waters to flow.”

Also indicative of Hinduism is the sacredness of sound. Patton said the motivation in all sacrifice is the speech made beforehand, “encapsulated in mantra.” But unlike the English language, which recognizes mantra as an indecipherable uttering, mantra is actually a “sacred, poetic formula” transferred from one generation to the next. In Hindu, for example, “shruti” indicates “that which was heard.” Patton relayed a story of two religious teachers who memorized 10,000 verses of the Vedas, a large volume of knowledge texts, even able to relay it backward.

“What I tell my students frequently is it’s like a game of telephone, only really, really serious, with really important consequences if you get it wrong,” she said.

“Rama” acts as another keyword of Hinduism, describing a believed monistic force that gives all beings their liveliness. It helps us understand, Patton said, the inner self that lives inside of us, called “atman,” identical to “Brahman” on a smaller scale. And yes, Patton said, this concept was in fact the inspiration for Star Wars’ force.

“According to early Hindu ideas, rama animates my voice as I share these ideas with you, it animated you as you got up in the morning, it animated the leaves that you saw and the light that you flipped on, and the smile or the tear on the face of your friend,” she said.

This concept acts as a lifestyle for some, as was described in the story of Satyakama, a young boy with a damaged past. Said to have come to a sage for life direction, Satyakama instead learned that he was someone who embraced the concept of “Brahman.” The sage acknowledged Satyakama’s sacred status and sent him off with 400 cows in tow, requesting he come back when the number of cows increased to 1,000. According to the story, Satyakama waited years before this occurred. Before he went back to the sage, he started a sacrificial fire, only to have wisdom spoken over him as the kindling blazed. When he returned to his teacher, the sage told him his face glowed, and Satyakama admitted this was because he had been taught by others, but what he really wanted was his own master.

“This is one of the most sacred relationships and has been a bedrock of Hinduism since ancient times,” Patton said. “A teacher in Sanskrit is in fact a teacher one discovers like Satyakama did, with whom one travels and with whom one lives, and who is present for one’s whole life, even if we are not physically in each other’s presence. It is a person who shapes one’s entire worldview.”

What I tell my students frequently is it’s like a game of telephone, only really, really serious, with really important consequences if you get it wrong,” Laurie Patton said.

The story also indicates the “long-term meditative practice grounded in experience” and the ways that our daily life paths mold individuals into who they want to be. Patton said some of the most important elements along the path are the relationships people hold. Living in community, in fact, is almost fundamental to the faith.

“It is the prism through which we see the power that creates attraction and repulsion and growth and decay,” Patton said.

However, clinging too hard to any one thing creates a “karmic seed.” The idea of karma, now so Westernized, is much deeper than “good luck you buy in a box,” Patton said. Instead, it is the profound belief that people are in a constant rotating cycle of death and birth. There are consequences to be had for passion too far left or right.

In this regard, she explained, everyone was related to one another in a previous life, and in the same respect, everyone must have ruled over one another in a previous life as well. When combining our past, present and future lives, all of our relationships become cyclical. Stepping into freedom is known as “osha,” ultimate liberation from the cycle. Meditation can often be a step in reaching “osha.”

In closing, Patton explained the “Song of God,” a story of a warrior acting with proper character and making sure to meditate along the way. There are similar elements in this story to the “satyagraha” concept Gandhi practiced and preached.

“If they can be combined, if we act ethically but without clinging to the results of our actions, we will know peace,” she said. “To be ethical is to connect with the divine. The experience of the numinous in relationship is the essence of Hinduism and the most powerful lesson our American fingers have gleaned over the years.”