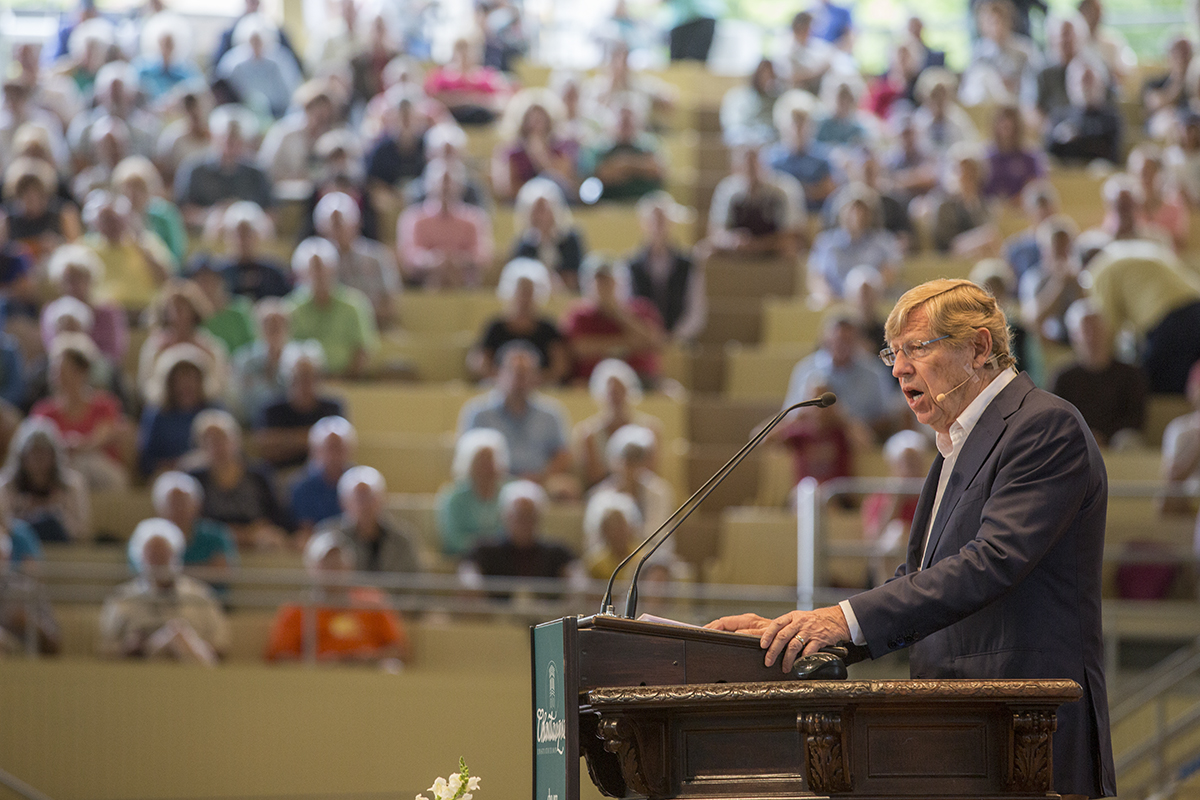 Ted Olson, former U.S. Solicitor General, discusses the topic 'The Supreme Court and the Future: from the 13th Justice forward' in the Amp on Friday, July 28, 2017. CAM BUKER/STAFF PHOTOGRAPHER

Ted Olson is happy he’s talking about the judiciary.

“I could’ve drawn one of the other branches of government and had to talk about the presidency or Congress, but I … lucked out and I got the Supreme Court,” Olson said.

Of course, Olson didn’t actually choose the topic of his Friday morning lecture randomly. As a former U.S. solicitor general who has argued (and won) cases on both ends of the political spectrum, Olson is certainly better suited for discussing the central institution of Week Five: “The Supreme Court: At a Tipping Point?” than he would be to discuss its legislative or executive counterparts.

But that doesn’t mean he can’t have personal reasons for favoring the judicial system, too.

“Many of us are (disheartened) by the sorry state to which the two political branches of our government have sunk,” Olson said, speaking from the Amphitheater stage. “Each is almost universally unpopular and both are only marginally functional.”

The Senate and House of Representatives are fractious and hyperpartisan, prioritizing re-election over policymaking, he said. President Donald Trump, meanwhile, meets the duties of his office with “hourly displays of incompetence, divisiveness, distraction (and) petulance.”

The picture painted is not a pretty one.

“A constitutional republic that lasted 228 years, through a civil war, economic depressions and world wars,” Olson said, “has become helpless, hopeless and hapless.”

Yet even in these dark times, there still shines a beacon of light — one government institution about which Olson can still find nice things to say.

“The Supreme Court stands out as a bulwark of strength, stability, consistency and respectability,” Olson said. “In times such as this, it is particularly important that all of us do whatever we can to keep (it) the way it is.”

This is ironic, given that the Constitution’s framers themselves saw the courts as by far the least powerful branch of the federal government. So inconsequential was the judiciary that the first chief justice, John Jay, resigned the post in favor of running for governor of New York.

Only once John Marshall took up that same title did the court finally become the “influential institution it is today,” in part after acquiring judicial review power through Marbury v. Madison.

That influence is as clear now as ever.

And that’s just recent cases. Over America’s history, a bevy of landmark decisions have revolutionized personal liberties in ways now considered commonplace, for everyone from black students in Topeka to journalists at The New York Times.

“Yet the court is respected by most Americans, and its decisions accepted as the law of the land,” Olson said. “The justices may have individual predilections … and disparate views on the Constitution, but the court is truly independent and incorruptible; the envy of peoples throughout the world.”

With only 113 justices and 17 chief justices in the Supreme Court’s history, the power of any one member is significant. Especially in close cases, a single justice can tip the scales one way or the other on decisions with nationwide and decades-long implications.

The Supreme Court stands out as a bulwark of strength, stability, consistency and respectability,” Ted Olson said. “In times such as this, it is particularly important that all of us do whatever we can to keep (it) the way it is.”

With all that power, however, comes risk. And for Olson, the “most serious concern” the institution faces is the nomination process by which new justices are confirmed.

For the first three-fourths of American history, it wasn’t a particularly controversial system. The president would nominate their pick and then the Senate would, in their constitutionally mandated “advise and consent” capacity, either approve or — rarely — deny the nominee.

“Over the course of history … presidents have frequently been surprised and frustrated by what happens after they appoint someone to the Supreme Court … (and) in response to this … presidents and their political allies have increasingly focused on the appointment process,” Olson said.

Seeking to predict what a justice will look like on the bench before they’ve even been nominated, presidents go to great pains to look at past work by nominees and vet them accordingly.

And the more the chief executive politicizes their nominations, the more “strident and contentious” the other political party’s opposition to the choice becomes.

“Was that the process the framers envisioned?” Olson asked. “Not so much. … (Alexander) Hamilton explained that in providing its advice and consent, there would be no exertion of choice on the part of the Senate.”

Only for one of a scant handful of defects on the part of the nominee — “favoritism, incompetence, provincialism, nepotism or cronyism” — could the Senate reasonably oblige the president to pick someone else.

Nomination battles and rejections weren’t unheard of, but were certainly rare, for nearly two centuries after Hamilton and the Founding Fathers originally outlined the appointment process.

But with the rejection of nominee Robert Bork and the near-rejection of Justice Clarence Thomas, that norm changed. Though a brief interim period of “relative civility” followed for some years, it once again became a “battlefield” with the nominations of Justices John Roberts and Samuel Alito.

“The seven nominations for the Supreme Court (since the mid-1970s and other than Bork and Thomas), starting with (Justice) John Paul Stevens and ending with Justice (Stephen) Breyer, received … an average (of) three (negative votes) per justice,” Olson said. “The next five justices, from 2005 to the present, received … (an average of) 35 negative votes.”

Even getting to the final vote is a feat in and of itself, though. Beforehand, nominees must reckon with dual abuse from the media on one hand and the Senate Judiciary Committee on the other.

The first half of this gauntlet is the press.

“From the moment the nominee’s name leaves the president’s lips, and often before, the media unleashes a swarm of investigators to delve into literally everything the nominee has ever done in his or her life,” Olson said. “Every action taken, every friend made or alienated, every word uttered … in public or in private, and everything the nominated has done — or, heaven forbid, written — in his or her life is deemed to be worthy of investigation and attention. No subject is off-limits.”

Although this press coverage has turned up legitimate issues on some occasions, Olson said that it far more often serves as a mere rumor mill, preoccupied with titillation regardless of relevance or reliability.

Over the course of history … presidents have frequently been surprised and frustrated by what happens after they appoint someone to the Supreme Court … (and) in response to this … presidents and their political allies have increasingly focused on the appointment process,” Ted Olson said.

Opposite the media stands the Senate Judiciary Committee.

“(In) one of the recent confirmations, the nominee was served with lengthy, multipart written questions from the committee,” Olson said. “(It) required (the) production of detailed information regarding every employer, business, professional or nonprofit entity with whom the nominee had ever been affiliated; all degrees, honors (and) awards; memberships including clubs, working groups, committees (and) conferences; publications, speeches, panel discussions, outlines of notes, radio interviews, television interviews; clients, cases, closing counsel, assistant counsel, physician statement report(s); judicial opinions written or even unpublished opinions.”

This comprehensive investigation is followed by written questions, one-on-one meetings and televised hearings lasting for days on end.

In 1995, the average length of such proceedings was five days; those of the last six nominees took an average of 107 (a statistic admittedly skewed by Merrick Garland’s 293-day wait).

This process is in part so notable because it didn’t even exist until recently.

“The notion that the Senate will hold hearings on a Supreme Court nominee, much less (command) a nominee to appear before a televised show in the Senate, was unheard of for much of the nation’s history,” Olson said.

Only when Southern senators wanted to vet nominees to get a sense of their stance on racial issues in the wake of Brown v. Board of Education did hearings become a mainstay of the nomination process.

This dynamic is particularly egregious as it relates to senators asking nominees their stance on specific matters of policy or legislation, Olson added. If 100 judges were asked whether that sort of politicized vetting was appropriate, he reckoned that not a single one would agree.

“Our finest citizens are scarred, diminished or embittered, even if they are confirmed,” Olson said, “and the reputation of the court is tarnished.”

But if there is no public outcry about this trend, it can only get worse. And without bipartisan effort to preserve the dignity of the Supreme Court — as was lacking during, say, the Garland controversy — it seems the playground “is not going to be taken over by adults” any time soon.

“(This) bitter partisanship erodes our government, our society, our culture and our respect for our institutions,” Olson said. “We are forced to become combatants.”