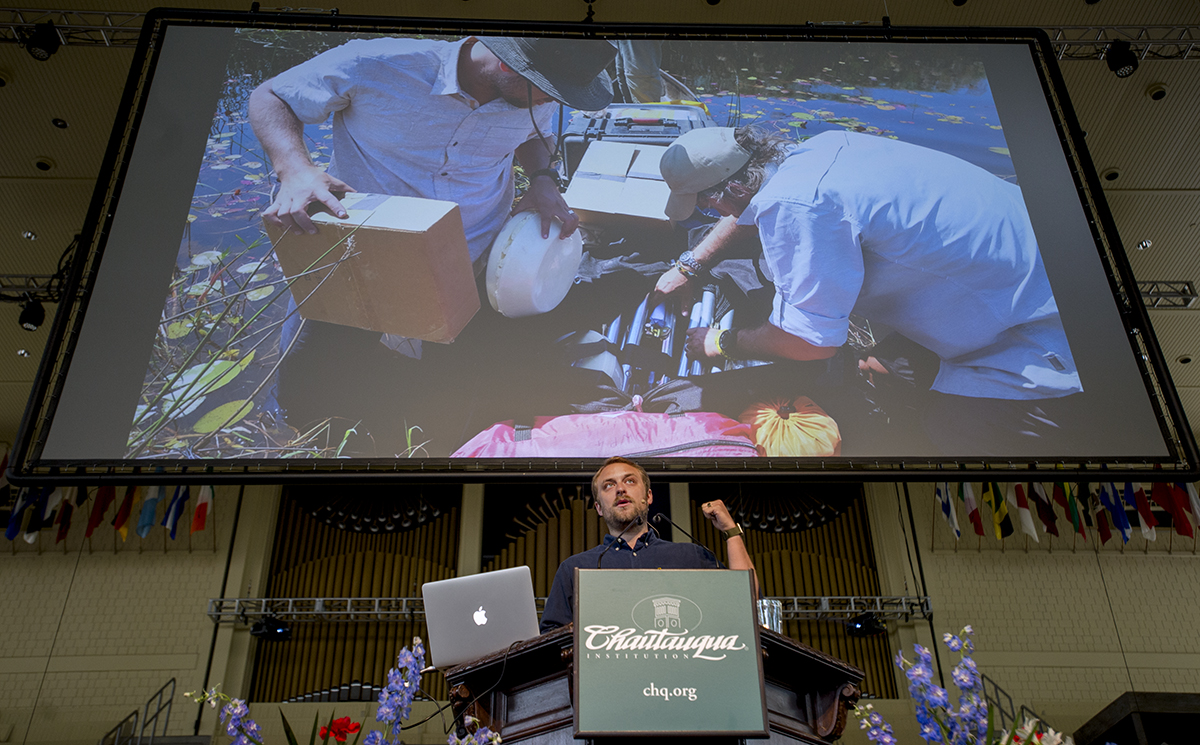 When people imagine an engineer, they probably have a certain picture in their heads: Safe. Predictable. Stuck in a cubicle all day.

What they are probably not imagining is a young, bearded guy pulling a dugout canoe through the swamplands of the Okavango Delta, hauling hundreds of pounds of gear past Nile crocodiles and the other wild animals that call sub-Saharan Africa their home.

But for Shah Selbe, “an engineer who works in the wild, this is what (his) office looks like.”

A conservation technologist and a National Geographic Emerging Explorer, Selbe spoke Thursday morning in the Amphitheater as part of Week Two: “The Human Journey: Origins, Exploration and Conservation.”

As someone who uses emergent technologies to solve ecological crises, Selbe faces plenty of problems the typical engineer would never encounter. One expedition left him with nine leeches stuck to his legs; even the less-parasite-filled trips find him carrying at least seven bags of equipment out into the field.

At the end of the day, though, his work in the most exotic of locations is still fundamentally about making lives better through innovation.

“Technology can help us when it comes to nature and conservation,” Selbe said. Specifically, it “helps us better connect with nature, … helps us better understand the impact that we’re having on the environment … (and) helps us better protect this planet.”

This drive didn’t come out of nowhere, however.

As a young boy, Selbe experimented with taking apart — and then putting back together — his father’s audio equipment; at science fairs where his peers where “building volcanoes or growing pea shoots,” he was “trying to figure out how satellites worked.”

“I’ve always believed in the power of engineering,” Selbe said, “(and) the ability for it to help us solve some of our greatest challenges. … (Engineers) built the basis of modern civilization.”

Selbe found an important application for that skillset while working with Engineers Without Borders, where he “realized that our planet is under threat.” He began using his “engineering expertise for conservation,” became involved with National Geographic and eventually found his specialty as a conservation technologist.

In that niche, he can “build the tech that helps us understand and explore the planet.” The historical relationship between engineering and exploration is a long one, going back to telescopes and sextants, and it is at that intersection that Selbe operates.

This is an especially pertinent field since “we’re in this new era now” wherein the infrastructure of “innovation is accessible to every single one of us.” As emergent technologies become more and more democratized (as with the smartphone, the drone and the internet), the ability to create change through invention has become more open to everyone, too.

“It’s really amazing stuff, and it’s now being used in conservation,” Selbe said. “In 2013, I built an app to help us protect the marine protected areas off the coast of California, and ended up giving it over to California to try and crowdsource … to citizens and scientists everywhere.”

Yet even as this technology allows for new potential, it comes at a “pretty dire” time, ecologically speaking.

Global fishing is “250 percent (of) what would be sustainable”; as much as half of all fish served in restaurants may have been caught illegally; animal smuggling is “the fourth-most-lucrative illegal activity.” All told, he said that humanity is amid a sixth mass extinction, and though there have indeed been five before, this one is different than the others.

“This is the first time that it’s being caused by a single species,” Selbe said. “That’s us. That’s humans.”

It is in resolving this ongoing crisis that Selbe hopes technology, like that which he has worked on, can help.

Part of that resolution can address reconnecting people to nature. Traveling down the Okavango Delta via canoe on a “biodiversity assessment,” Selbe and his team came face-to-face with animals that many people never encounter in the wild.

“I used to think hippos were cute animals until I was around them,” Selbe said. One particular hippo “wanted to impress us, so he got out of the water and started spinning his tail and defecating, doing what I like to call a ‘poop tornado.’ ”

Intent on making the fruits of his experiences available to the masses, Selbe made all of the project’s data open-source, available for everyone’s use on intotheokavango.org. Incorporating 360-degree virtual reality, live streaming and social media, the team “wanted to share everything with everyone immediately.”

Collecting this sort of data from the environment has always been expensive, which “limits the amount of data (scientists) can get.” But here, too, emergent technologies can help. For instance, a flow meter that would typically cost the team $4,000 was instead 3-D printed for $20.

“So we’ve been building the tools that allow other scientists to do exactly what we did in Okavango,” Selbe said.

If these tools are meant to solve environmental crises, then the impact of those crises is no more evident than at Bow Glacier in the Canadian Rockies, which is “melting at a rapid rate.”

Selbe recently went to Bow to set up a sensor array to monitor climate change. Hiking up the glacier and working through a sprained ankle, he set up sensors that will allow scientists to monitor how the glaciers are “changing over time.”

But the experience wasn’t just important climatological work; Selbe also took part in what he “was told was a tradition the first time (someone) is around a glacier,” drinking fresh glacier water and even having a glass of bourbon with 80,000-year-old ice.

The live data being gathered by the sensors he set up is now going to be incorporated into a “massive public art installation” in downtown Calgary, a city built around a river fed by Bow Glacier.

“It’s also really interesting that the home office of one of the largest oil companies in Calgary is going to be right in front of that,” Selbe said.

Not all environmental crises are so easy to make visible, however. Another project Selbe has done was on the Caribbean island of Barbuda, where he struggled with how to make evident the threats to the ocean.

Selbe was brought there partially because he had previous experience using drones for conservation, which was the technology that Barbuda wanted to use to catch people abusing the coastal ecosystems.

“We need a drone, we have to have a drone … because we know people are doing stuff right off the shore here; we can see it,” the Barbudans explained to him.

Of course, the solution isn’t always so analog. From tracking devices inserted into illegally traded shark fins to smartphones hidden in rainforests used to listen for illegal logging, Selbe is well-versed in taking the latest innovations of Silicon Valley and applying them to what he calls “the golden age of conservation technology.”

Pointing toward the idea of the “tragedy of the commons,” Selbe said “our planet, our oceans, our wildlife” are the “commons” that humanity is spoiling for itself. But today’s perpetrators of that abuse will not receive the worst of its consequences.

“Just four months ago, I became a father to this beautiful little girl,” Selbe said. And it is for her that Selbe wants to “leave behind a planet … that’s better than the one we inherited.”

Lake Street Dive to ‘settle into a groove’ with Amp audience