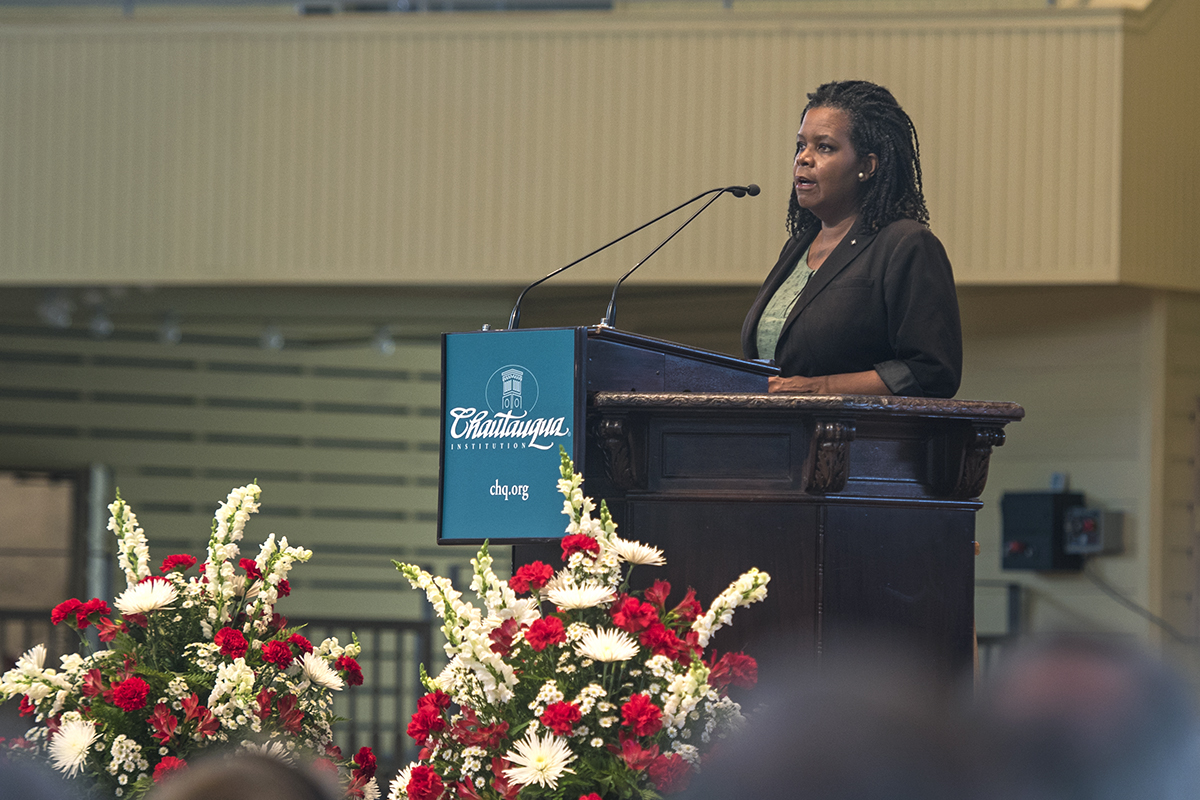 Historian and law professor Annette Gordon-Reed delivers a lecture on Tuesday, July 25, with the weekly theme "The Supreme Court: At a Tipping Point?" in the Amp. Gordon-Reed explained Alexander Hamilton’s understanding about the judiciary in the Federalist Papers, and challenged that the Supreme Court is the “least dangerous branch” of government. OLIVIA SUN/STAFF PHOTOGRAPHER

The Supreme Court seems to constantly be in the news cycle these days, but according to Annette Gordon-Reed, the law has always held a special place in the American collective imagination.

“(The) colonists being from Britain, sort of culturally British, of course, took law very very serious(ly),” Gordon-Reed said. “(They) were very law-minded people.”

Since the country’s founding, with rule of man replaced by rule of law and democracy having superseded monarchy, the judiciary has held not just political but also cultural power.

Speaking Tuesday morning in the Amphitheater as part of Week Five: “The Supreme Court: At a Tipping Point?,” Gordon-Reed — the Charles Warren Professor of American Legal History at Harvard Law School — explored the dynamic interplay between these two aspects of the federal court system.

Of course, having federal courts at all was not a given.

“(Alexander) Hamilton (wrote) six essays in The Federalist Papers about the judicial branch as a way of trying to calm the fears of people who were suspicious of … the whole idea of a national government,” Gordon-Reed said. “And ‘Federalist 78’ … (explicated) what this new federal law system was supposed to do.”

Structured from their inception to be largely independent of both politics and the other two branches of government, the courts were afforded certain powers and protections that other government institutions lacked.

Yet their influence did not go unchecked.

“Hamilton (described) the court very famously as the ‘least dangerous branch,’ ” Gordon-Reed said, to audience laughter. “Now you laugh, you laugh … we know how powerful the court has become, but in those days — the days before the legal realists came and told us that law was really about politics — there was thinking that it was possible for people to be guided by reason.”

It was that purpose for which the judicial branch was made. As Montesquieu outlined, the executive brings energy and the legislature has the will of the people, but the judiciary possesses judgment.

Since the courts lack power over both America’s military and purse strings, Hamilton saw them as the least “potentially harmful” to the nation.

“But what (he wasn’t) anticipating was how important law would become to Americans,” Gordon-Reed said. “I mean, it’s always a part of the American psyche, but a country that has a written Constitution that is contractual in nature … makes people think a lot about law.”

It was this preoccupation that led Alexis de Tocqueville to call Americans an “extremely law-minded people.”

Such a culture could not maintain the Founding Fathers’ plan for a neutered judiciary.

“This idea of judges who just sort of render judgment and don’t have power can’t really hold in a society where every single person thinks of them selves in terms of legal rights … (and so) the power of the court grows over time,” Gordon-Reed said.

The aftermath of the Civil War, and the 14th Amendment in particular, only increased the importance of the law to laypersons.

Hamilton (described) the court very famously as the ‘least dangerous branch,’ ” Annette Gordon-Reed said, to audience laughter. “Now you laugh, you laugh … we know how powerful the court has become, but in those days — the days before the legal realists came and told us that law was really about politics — there was thinking that it was possible for people to be guided by reason.”

The Jim Crow backlash to this increase in personal rights diminished the prevalence of law as an instrument of politics for several decades. It wasn’t until the 1920s when people again “used law to try to change American society.” Working through the courts once again, black and white lawyers alike drew on the Constitution as an instrument of liberation.

“People think about Brown v. Board of Education as something that just sort of burst on the scene in the 1950s when in fact this was part of a project, a process, in the ’20s and the ’30s,” Gordon-Reed said.

As civil rights lawyers in the 20th century employed legal avenues as “a mechanism of reform,” the larger American public began to think of the federal judiciary as “a tool for a form of revolution.”

This was seen by some as undemocratic, given that many Americans were opposed to the ideas of racial equality that the courts were implementing. In fact, the very reason the courts were being used to advance civil rights was because the traditional legislative mechanisms were resistant to such change.

“We became used to, I think, using the court to achieve political ends,” Gordon-Reed said.

This sentiment allowed for more activist courts, like that of Chief Justice Earl Warren, which pursued political reform in everything from welfare to criminal justice to voting rights. More right-leaning courts pursued ideological ends, too.

Although the Supreme Court is now in a period of “retrenchment,” the influence of those decades of a more activist judiciary remains.

“The court again becomes, more visibly, an active part of the political process … (and it) becomes a real part of people’s political calculations,” Gordon-Reed said.

For example, voters “really become single-issue” when voting for presidents, taking into account not just the policies of the executive, but also who a candidate would appoint to be on the Supreme Court.

“And that’s sort of interesting to think about, that it’s come to this point (where) we’ve given this kind of power to nine people in a democratic republic,” Gordon-Reed said. “Everything turns, so much turns, on people’s understanding of what the court is going to be doing.”

What is the right balance of power in this institution, then?

Gordon-Reed goes back and forth on it.

“I was trained by people who … (were) very much into this system, and that was my prejudice as well. … My default position is to sort of say, ‘Yeah, you know, these are the people who should be making decisions,’ ” Gordon-Reed said. “That is an elitist position, I understand, (and) it is a Hamiltonian position, I would say.”

But perhaps there is an alternative to having these few “supreme arbiters of the law” interpreting the Constitution — America’s “secular sacred text” — for everyone.

“It’s so hard to see a way out of that, other than people — citizens — taking it upon themselves to become more active,” Gordon-Reed said.

Judges are held up as saviors of the American people, but there are avenues for policy change at every level of government (from the local to the national) by which average citizens can inform and influence politics. If there were more grassroots engagement in the political system, Gordon-Reed said, people wouldn’t need to place their faith in the judiciary.

Of course, populism is never simple.

“I, as I said, am ambivalent about this; I trust people (and) I believe there should be participation, but as the member of a minority group — a minority in terms of numbers as an African-American person, (and) women are not the minority, but we have been marginalized throughout history — I’m not so gung-ho about majorities, that majorities are always going to make right decisions,” Gordon-Reed said. “But I understand that that’s the principle on which we live.”

Though she tends to believe that knowledgeable elites “might make better decisions,” Gordon-Reed added that “that’s not always the case.”

And that’s sort of interesting to think about, that it’s come to this point (where) we’ve given this kind of power to nine people in a democratic republic,” Annette Gordon-Reed said. “Everything turns, so much turns, on people’s understanding of what the court is going to be doing.”

All the same, total reliance on the Supreme Court is also not “the way to go”; individual-scale participation and communication have a role to play, too.

Now, in “sort of … unprecedented times,” it remains to be seen how the government reacts to changing power dynamics and legal contexts.

“I’m confident — I try to be hopeful about these kinds of things — that the system that was put in place will sort things out, one way or another,” Gordon-Reed said.

These changes also afford new opportunities for individuals to get involved in government.

“What role do citizens have in a situation like this, in a moment like this?” Gordon-Reed asked. “It’s certainly not giving things over to a court. … This is something that’s going to require all of us to step up and to make our feelings known. … This is a time for citizen engagement, and not relying just on courts.”

With a newly invigorated sense of activism and a court that, according to Gordon-Reed, is more attentive to public opinion than it looks, the public does not need to rely on the court system to unilaterally “save the day.”

“I alternate between pessimism and optimism, with much more of a tilt toward being optimistic,” Gordon-Reed said. “And I’m optimistic now, I would say, because I do think that people are more engaged on both sides. … We can do things in a way that I think was intended for democracy … and that is for people to make decisions among themselves, understanding the humanity of one another, recognizing and respecting and trying to make the best community that we can.”