Though life span increases bring improved medical care and advanced social systems, gaps and disparities still plague the human population. By looking at the history and science of longevity, Linda P. Fried dispelled several old-age myths that hold society back from tackling some of the world’s most pressing issues — including health care inequalities and climate change.

Fried, dean of Columbia University’s Mailman School of Public Health, spoke at the 10:45 a.m. morning lecture Wednesday in the Amphitheater, continuing Week Four, “The New Map of Life: How Longer Lives are Changing the World — In Collaboration with the Stanford Center on Longevity.”

Fried began thinking about longevity in 1986. She was working as a physician intern at The John Hopkins Hospital when the new chief of geriatric medicine asked if she would join his department. That night, Fried started looking at the data backing geriatric advancements and said what she found “blew her away.”

The data showed an increase in life expectancy over time. In the beginning of human existence, life expectancy ranged from 18 to 25 years. By 1900, it had increased to 47 years. By 1960, it was 70. Now, it is 79. Throughout all of those increases, African Americans had shorter life expectancies than any other group.

“There has been a huge improvement, but huge gaps still, in race differences, in opportunities for longer lives,” Fried said.

Now, there are more people over the age of 65 in the world than there have been at any point in  human history, combined.

“This year we are at a crossing point, both in the U.S. and in the world, that we are about to have as many older adults in our country as we have children,” she said. “What a shift — we have never seen this before.”

The day after reviewing the data, Fried committed to becoming a geriatrician. Throughout her career, she has come to understand that life expectancy did not increase by chance.

“It wasn’t by chance, it was intentional,” she said. “(It was through) society-scaled investments in the things that create opportunity, ideally for everybody, that raise both the floor and the ceiling of health, access to education, access to opportunity, and have extended our lives.”

As a result of those investments, Fried said society is seeing a “dramatic transformation.”

The age structure transformation matters, but Fried said the progressions it took to get there are more important.

The progression was the first demographic dividend, which is what happens when countries shift from having high mortality rates to low mortality rates.

As children began to survive their entire childhoods, every country experienced a second demographic dividend, which is when the labor supply of young, capable people became the economic powerhouse for a whole society.

“Countries flourish as they have more workers than dependents,” Fried said. “Even the size of the number of children in the population relative to the number of people working is lower. As this age structure changes, as young people move into adulthood and succeed, countries are really fueled economically and have an opportunity to flourish.”

But older people play an economic role in society as well. Societies where people live longer are wealthier societies.

As societies continued to improve, Fried said the news coverage stopped lining up.

“If you look at the headlines in the papers, the dominant picture is that population aging is a big, big problem,” she said. “We seem to be anticipating that this immense, unprecedented success is a big disaster.”

Fried said the common perception is that older people have too many needs and are not contributing enough to society. That perception is reflected at a policy level with the “old-age dependency ratio” — the number of people in the United States who are 65 years or older, over the number of productive, working-age people, mainly 18 to 64 years old.

“How we can afford more older people, or not, is being boiled into an old-age dependency ratio with the implication that every person 65 or older has deep personal care needs, none of them work for pay, none of them contribute anything to society, their families, their grandchildren or the betterment of their communities,” Fried said. “There are a lot of questions there.”

“If you add up what we know how to count, which is the hours of volunteering by older people and informal caregiving for loved ones, it adds up to $160 billion a year in contributions in the United States by older people, which is the dollar equivalent of what the U.S. spends on long term care,” she said.

On a personal level, there are a lot of fears about aging. People assume they won’t have enough money when they grow old, that they will lose their role in society or that they will be ill and without the care they need.

There are also a lot of myths, such as the misconception that older people are financially dependent.

“The data shows that financial transfers go more from old to young than young to old,” Fried said. “Big time.”

Another myth is that jobs for old people take jobs away from young people.

“That’s called the ‘lump of labor fallacy,’ and it is not true,” she said. “Older people who are economically productive create jobs for younger people.”

When Fried was training to become a geriatrician, she said the “question of the time” was whether certain diseases and disabilities could be prevented in older people. Would doctors even prescribe what is needed for prevention if they could?

“Fast forward 25 years, the answer is a resounding ‘yes’ on all counts,” Fried said. “We know now that half  of all chronic diseases are preventable, such as heart disease, stroke and cancers. We don’t do it, but we know it.”

Fried said it is also apparent that healthy environments matter as people get older. The fourth leading cause of death is air pollution, a problem the United States has just started to control.

“Many of the cities where your kids couldn’t go out and play in the morning because it was too polluted are no longer like that,” she said. “These things matter in terms of whether we age healthy.”

What the U.S. has yet to solve are the racial disparities in life expectancy.

“Too many people, who are not receiving the benefit of this kind of prevention, are arriving at old age sick, if they’re lucky, and are tracked to get sicker,” she said.

Fried recalled a study that showed that older black people in the City of St. Louis, who were not beneficiaries of prevention assets, developed multiple diseases and became disabled at least 10 years earlier than white people and black people in St. Louis suburbs.

“We have not solved the inequality issue, but if we do, we will have the opportunity to get everybody to arrive at old age healthy and be tracked to stay healthy,” she said. “That will be a game changer for our country if we think about the opportunities it helps unlock. It will be a game changer for all of us if we think about the health care costs that could be lowered as a result.”

Where does all of this leave society? Fried isn’t sure yet. Is the future going to be a disaster? Could it be great? How does a society plan for children who will live to be 120?

“If this is about people we love, if this is about a future we care about, let’s think about what’s possible,” she said. “We have created a new stage of life — we added 30 years — but what do we do with it? Are there any opportunities here?”

Young people are already living with the expectation of a longer life, but Fried said society has not adapted to their expectations because people get hung up on the challenge of an “either-or mentality.”

The answer to that question is the “design opportunity of the 21st century.”

To consider what that design might look like, Fried asked the audience to consider Nelson Mandela’s work in The Elders, an international, non-governmental organization for esteemed elders working together for peace and human rights.

“The Elders see it as their mission to work every single day of their lives, together, to tackle the issues that threaten our future and lay the groundwork using what they know, their skills, their connections, their network and their presence on the global stage to craft a better future,” Fried said.

Fried said this organization sets the stage to commit a “grand act of imagination” that will build a better society.

To begin, Fried said the design needs the basics: Social protections and health programs, such as Social Security and Medicare, which act as models for the future.

“(The models) offer what we’ve learned, which is if we design the institutions and systems of our world for the length of life we now have, they turn out to be better for everybody else,” she said. “It’s true for how we design age-friendly cities, it’s true for how we design age-friendly health systems and it’s true even for whether we make stop lights last long enough to get across the street for everyone.”

As people age, Fried said they gain wisdom and unique knowledge, but are not using it to leave the world “better than they found it.”

“It is really important to successful aging to know that your time on this Earth matters — the things we do will endure beyond us,” Fried said.

One of the issues older people need to act on is climate change, she said.

“The Elders said there is no question that the existential crisis of our future is climate change,” Fried said. “They said a global solution to the climate crisis requires the direct participation of the people who are most affected by it. Older people are most affected and young people are the ones most likely to die from massive heat waves, hurricanes and flooding.”

Fried proposed that Chautauqua become a model for how older adults can become the “pay it forward” generation on climate change and other pressing issues of the future.

“Every 20-year-old here will be 60 when we have solved these problems, when we have built a society for the opportunities of longer lives, when every age group benefits,” Fried said. “It’s going to require our collective grand act of imagination for an uncrafted future that is possible.”

Get Up Close and Personal With Butterflies at BTG’s Monarchpalooza 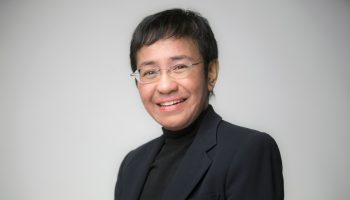 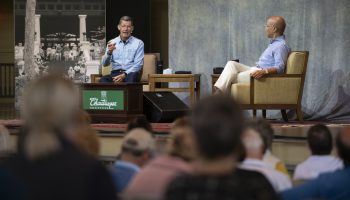 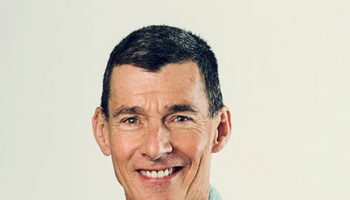 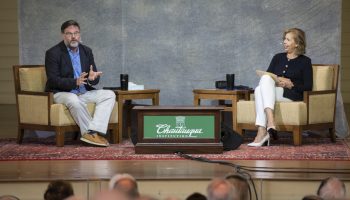