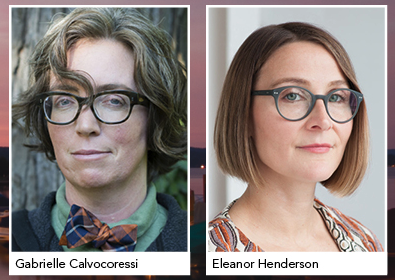 From the time she was little, Eleanor Henderson said she always wanted to write stories.

“I would tell stories, and mostly I would plagiarize them from books that I read or shows on Nickelodeon,” said Henderson, an author, educator and the Chautauqua Writers’ Center’s Week Three prose writer-in-residence. “It’s something I’ve always taken for granted as something I could do. It wasn’t until I was an adult that I interrogated my access to writing as a particular kind of privilege.”

And it’s those issues of privilege and authorial intention in fiction writing that Henderson said her week-long Chautauqua workshop will address.

“A question that I ask my students in class is: How do we tell ethical stories about other people, whether they’re real or imagined?” she said. “I’m a fiction writer by trade — I’ve published two novels about people very different from myself, whether that’s culturally, regionally, racially or religiously.”

At 3:30 p.m. EDT Sunday, July 12, on the Virtual Porch, Henderson will give a reading from a work-in-progress memoir, prospectively titled Everything I Have Is Yours, which details Henderson’s 20-year relationship with her husband. She’ll be joined by the week’s poet-in-residence Gabrielle Calvocoressi, an award-winning poet, professor and editor at large at the Los Angeles Review of Books. Calvocoressi will read from Rocket Fantastic, the third book of poetry from the associate professor at UNC Chapel Hill.

“A lot people identify me as a queer, lesbian writer, but (when I was writing Rocket) I was thinking about what gender meant to me as someone who would ideally not have a gender pronoun,” said Calvocoressi. “I was thinking about how you would deal with that in poems, how do you think about that. That was something that became a big part of my book.”

Calvocoressi said Rocket took 10 years to write, and that the breakthrough with the book came during a residency through the Lannan Foundation.

“My plan was to read the book through and then just begin revising and have it all finished by the end of the week,” Calvocoressi said. “Instead I started reading the book, and my stomach began to drop. I could feel that the book was a total disaster. So I had to make a decision — am I going to give up on this book and start something new, or am I going to figure out what this book really wants to do and rework it?”

After three solid days of lying in bed, Calvocoressi decided to do the latter.

Calvocoressi’s workshop, titled “Summer of Joyful Ghosts: A Workshop Jubilee,” will direct students to address their writing ghosts through the ongoing creation of poetry.

“It’ll be a generative workshop, where people can write a lot of new work if that’s what they want to do, but also give people generative exercises, where if there’s something they’re already working on and they want to continue that, we can do that together,” Calvocoressi said.