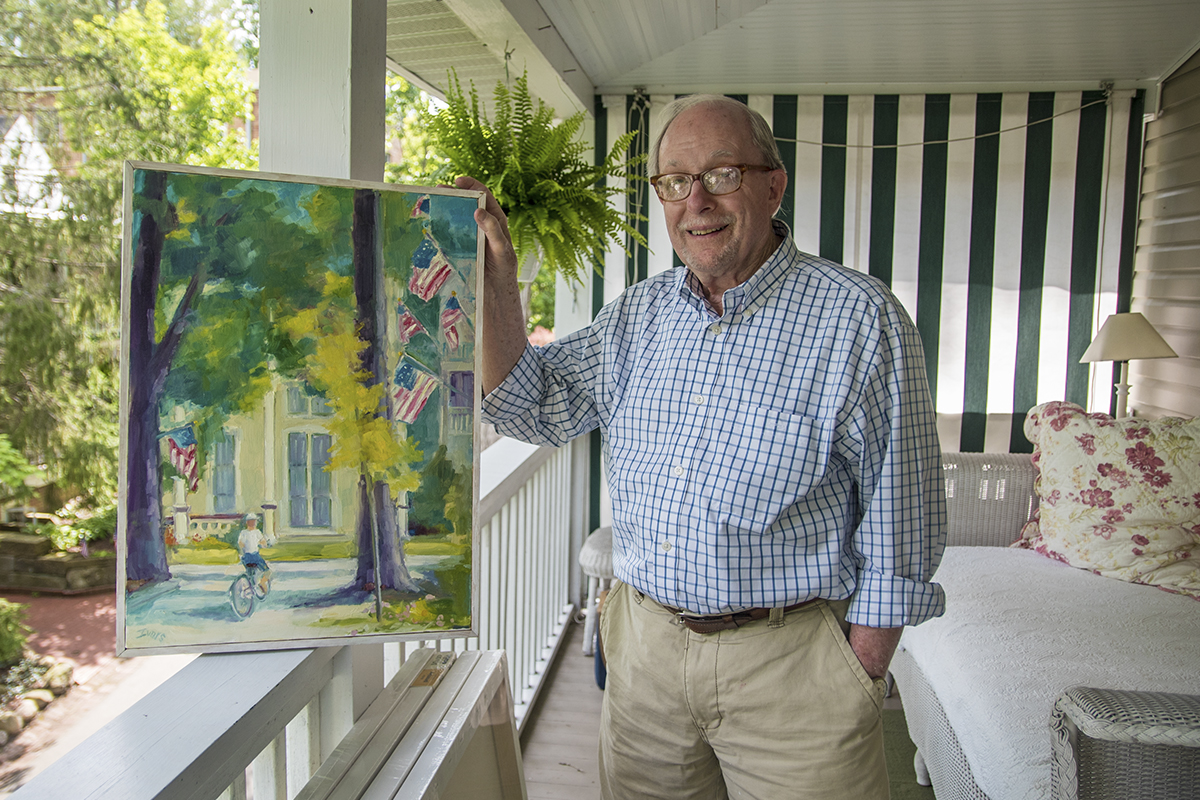 Bob Ivers with his painting, "4th of July Band Concert" in the Peck St. studio of his daughter, Beth Munro, on Sunday, July 16. Ivers was the former director of design of Corning Incorporated, as well as a trustee of the Chautauqua Institution. OLIVIA SUN/STAFF PHOTOGRAPHER

Adelaide La Fond has been coming to Chautauqua Institution with her husband since the 1980s.

“For an artist, it’s the closest place to heaven I’m going to get,” La Fond said.

La Fond is one of 12 artists with ties to the Institution who are donating works to the “Paint Chautauqua” auction to be held July 29, the night of VACI Partners’ Stroll Through the Arts Gala. Each work will depict a scene that represents Chautauquan life, and proceeds from the live auction will benefit scholarships for School of Art students.

“I like to give back to community,” La Fond said.

For more than 20 years, La Fond donated work to the Art for Change charity art auction in Pittsburgh, where she lives the rest of the year.

“I really like to stay in the background, but a visual artist has to be seen,” she said.

Donating is one way La Fond puts herself out there.

She considers herself a colorist, like one of her favorite painters, Pierre Bonnard, painting with vibrant colors that are often more heightened than the actual scene at hand. La Fond hasn’t yet decided which painting she will contribute to the auction, but she’s considering works that depict the old Amphitheater and the shore of Chautauqua Lake.

This will be La Fond’s second time donating to the live auction, but that doesn’t mean it’s easy.

Sitting at a live auction while people bid on your work is “kind of nerve-wracking,” she said. “You have to develop a tough hide.”

Like La Fond, Bob Ivers has donated to the auction before.

Ivers sees the Institution as “a great environment for serious artists.” Though Ivers made his living in design and architecture, once he retired, he turned to oil painting. His love of art was something his passed on to his daughter and granddaughter.

Ivers’ daughter, Beth Munro, is a full-time artist based in Fairfield, Connecticut, and Munro’s daughter Alice also paints. The three share a connection to Chautauqua — by Ivers’ count, his family has been spending summers here for 26 years.

Though her work is usually abstract, Beth Munro will create a representational scene for “Paint Chautauqua.” She hasn’t decided what she will paint, but expects it will be a still-life, “something summery” — perhaps hydrangeas.

“I love to give back,” she said. “I’m very happy to do it, give it to the scholarships for students.”

The piece Ivers is submitting for “Paint Chautauqua” is a Fourth of July scene he started on-site.

He does a lot of paintings en plein air.

“It’s fun to paint outside,” Ivers said. “I thought that would be a good one.”

Like Ivers, Audrey Kay Dowling enjoys painting en plein air. She creates landscapes, waterscapes and still lifes of flowers and plants. For her donation, she originally painted the Chautauqua Gorge, but later decided to try painting the backyard at the Unitarian Universalist House if the weather was agreeable.

This is her first time donating to the auction.

“Because it’s for a scholarship, for new people who want to try and join the ranks of the art world, it was particularly appealing to me,” she said. “It’s important to give back.”

Though Dowling is kept busy running Portage Hill Art Gallery, which she’s owned for about 35 years, both she and her husband have been involved with various groups at the Institution. She was involved with the founding of the Chautauqua Craft Alliance, which holds juried shows twice a summer on Bestor Plaza, and is on the Unitarian Universalist Fellowship board.

“Over the years, we’ve developed lots of great friendships with people who come to Chautauqua,” she said.

Betsy Vance, president of VACI Partners, said the gala has been going on for at least 10 years, and this is the third year in a row that an art auction has been part of the gala.

“The auction is our biggest fundraiser every summer,” Vance said.

Last year, VACI Partners donated a total of $43,000 to the School of Art scholarship program, through gala and auction proceeds, Art in the Park and donations.

Tickets for the gala are still available and will be sold until all 200 are gone. Vance said that tickets will be available at the door, but it’s best to buy ahead of time.

Attending the gala isn’t a requirement in order to bid on a piece at the auction — those interested may leave a bid for any of the artworks with Judy Barie, the Susan and Jack Turben Director of Galleries, beginning July 24, when the art will go on display. Vance said the art to be auctioned will be hung in the Strohl Art Center until July 29 “for all to see.”