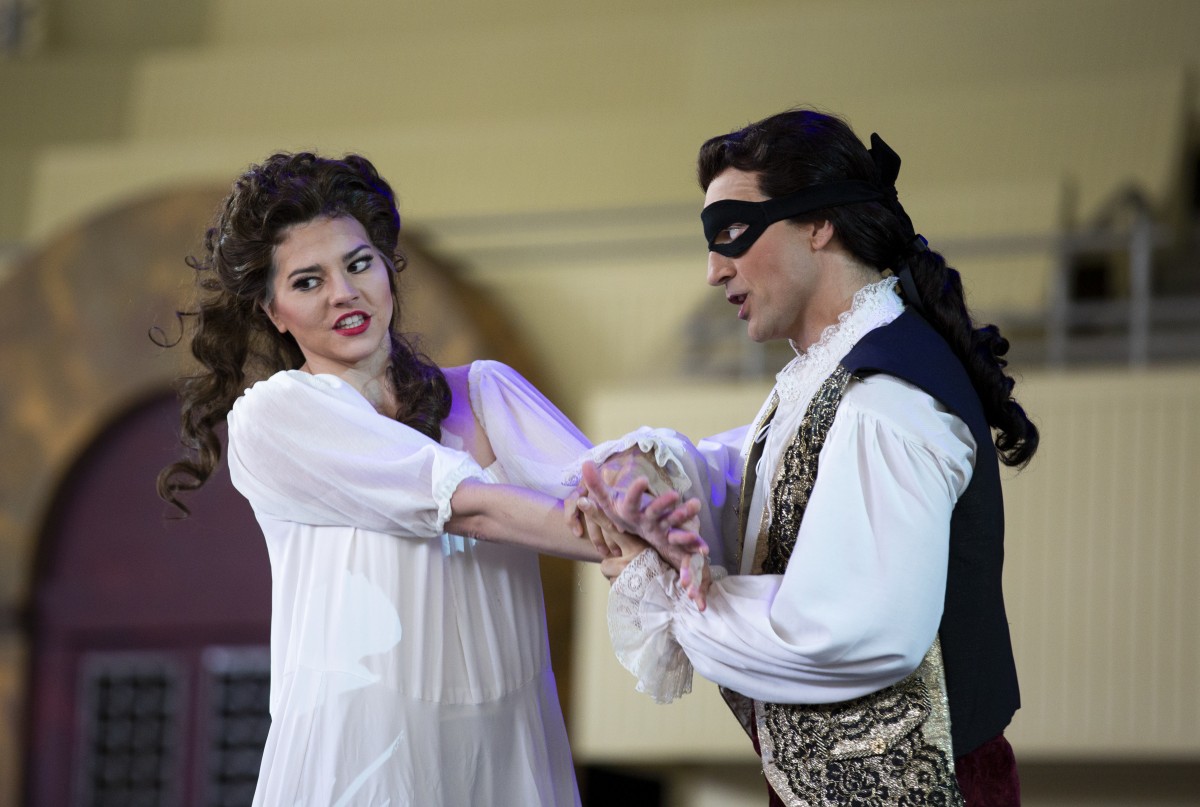 David Adam Moore has played the title character in Don Giovanni six times. As a baritone, the role was always a good fit for his voice, he said, but the character became relatable as he experienced life.

“I don’t think I understood the role then nearly as well as I do now, because I had not faced the kinds of challenges and situations in my own life that had pushed me to be that single-minded about something, that obsessed about something,” said Moore, a guest artist with Chautauqua Opera Company.

Chautauqua Opera will open its season with the opera about serial seducer Don Giovanni at 8:15 p.m. Saturday, July 7,  in the Amphitheater.

Addiction is a dominant theme that drives both the narrative and Giovanni’s character throughout the opera, which gives Mozart and Da Ponte’s 1787 score and libretto a contemporary interpretation, Moore said. Giovanni’s focus is on sex, and the opera highlights how unsustainable the life of addict can be.

“For him, the world completely melts away. … He’s created his entire persona, his entire life, his entire social position has been cultivated to go after as much sex as possible,” Moore said. “When he isn’t enjoying sex or pursuing sex, he is an empty shell of a human being. He needs that to feel OK, just like any addict.”

Stage Director Ned Canty is often asked how Don Giovanni fits into the scope of the #MeToo movement. The opera’s continued relevance shows that Mozart and da Ponte were dealing with issues of consent during their time. Canty said the best operas are relevant no matter what year it is.

“Because it explores facets of the basic human condition, it is always relevant to the discussion of whatever is happening today,” said Canty, who has directed the opera six times previously.

Canty has explored the opera’s themes with the guests and Young Artists in detail so they better understand the characters’ motivations. When teaching artists, he asks them why their characters are doing what they’re doing.

“It is very important to me that the first time they are doing it, they are asking the important questions,” he said.

For guest artist Richard Bernstein, this is not his first time with the opera or at Chautauqua. In his life, he has performed as Giovanni, Masetto and Leporello, the character he will portray this time at Chautauqua.

Bernstein, who just completed his 23rd year at the Metropolitan Opera, has assumed the role of Leporello more than 100 times and considers it his favorite role. The bass role fits Bernstein’s voice well, and he said he feels a connection to the character.

Although the character is familiar, Bernstein always starts the opera with a new score, and life experience has pushed every performance further than before.

“In all of the scenes, it’s not just learning what you’re singing about. You really have to know what everybody is singing about. I think that was probably the biggest challenge learning it in my 20s versus now,” Bern- stein said. “Now, I speak Italian. It’s easy for me to check in and listen and hear where people are. Before, I would really have to study.”

Don Giovanni is an opera that works best in a setting that will spark conversation, which makes it good for Chautauqua, Canty said.

Bernstein said he’s glad he could return and explore the nuances of Leporello further.

“(The attendees will have) an incredible theater experience and great singing and music,” he said. “I think it’s going to be an exciting night at the opera, quite frankly.”